Top 10 Most Dangerous Cities in the World

Well, we're not interested in all that nonsense. Below you'll discover the most dangerous cities in the world - the ones where wandering into the wrong part of town can lead to you being mugged, abducted, or outright killed.

Muzaffarabad is known as Paradise on Earth and is a spectacular place, well worth visiting due to its serene lakes, magnificent landscapes and lush greenery. Despite this, demonstrations, processions and rallies occur throughout the city on a regular basis and disturb the daily life of its citizens.

Being in the center of contention between India and Pakistan, a memory of the cold war days, it is believed that Muzaffarabad is surrounded by three nuclear powers that could lead to a nuclear holocaust at any time if things heat up. It might not be an understatement to say that living in the city might be one of the most stressful things a person would want to experience.

Crime is out of control
0
9

In 2009 Ciudad Juarez was called "the most violent zone in the world outside of declared war zones", and for good reason. Plagued with gang wars, drug cartels and abuse of women, the city's murder rate is estimated at around 130 per 100,000 citizens.

As a result of the implementation of NAFTA and the exponential rise in job opportunities in the city, hundreds of female factory workers have been murdered, and violence towards women has been on the rise. In under a decade around 300 women have gone missing and over 400 have been victims of sexual homicide.

Wouldn't want to meet these guys in a dark alley.
0
8

Crimes of opportunity, including pick-pocketing and muggings are a norm in the city, and are mainly committed by homeless children, also known as "sheggehs". Due to the high rate of vehicle thefts, hijackings, and armed robbery, it is recommended by the local municipalities to drive with windows closed and doors locked at all times within the city borders.

Even public transportation is unsafe in the city, as pick-pockets and muggings occur frequently in major transit lines, and make daily life in the city dangerous and unsafe.

Despite being a tourist magnet and the second-largest city in Brazil, Rio de Janeiro has been considered one of the world's most dangerous cities for many years. As if violent gun crimes and drug trafficking wasn't enough, the city is also plagued by assassination attempts between the drug dealing cartels who pretty much control the city.

The murder rate in the city is so high that over 30 people lose their lives from crime-related activity every week. Many of these murders are caused by stray bullets.

Located on the southern tip of Africa, Cape Town is considered one of the most beautiful cities in South Africa, and for good reason. Its lavish landscapes and tranquil beauty attract millions of tourists each year. It therefore comes as a surprise that every year, tourists and locals alike are subjected to robbery, theft, murder, and kidnapping. Car hijackings by the mafia and drug addicts are also a common occurrence in the city, whose crime rate is the highest in South Africa due to huge economic and social disparities.

Of course, many areas of the city are perfectly safe, and for the most part Cape Town is seen as a fantastic holiday destination. It is important, though, to steer clear of the crime-ridden areas, which include Seapoint, Salt River, Cape Flats, Observatory and Mowbray. 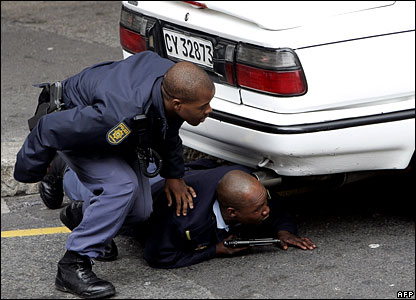