10 Amazing Innovations of the Near Future

I think we can all agree that computers and the internet have had a huge impact on pretty much every industry, and are the cornerstones of our modern civilization. It's amazing to think that people once thought of computers as a huge waste of space, and that they would never become popular. The past decade has taken these innovations and brought them into the mainstream with technologies like social networking, GPS, smartphones, and a whole lot more. It truly is mind-blowing to see how far we've come in the past decade alone.

We live in a unique and interesting time in human history, where the sharing of ideas and information is done at lightening speed, and innovative research is at an all-time high. The next 10 years are going to be one hell of a ride, with so many problems still left to solve - from overpopulation to finding alternative energy sources, from ending illness to exploring space - and we're only just starting to understand this basic fact: for all we know, we know almost nothing.

With all the innovation taking place in the world, from tiny steps in existing technologies to new, industry-changing ideas, it's getting pretty hard to keep up to date with the latest discoveries. If you're interested in a small glimpse of what's in store for humanity in the near future (we limited our list to technologies we believe could be out in the next ten years), then this list is for you.

Many people don't like to type on touchscreen keypads because the keys are slow and cumbersome. Here's the solution: a keypad that raises up out of the screen when you need it. Then it recedes back into the screen when you want to go back to touch mode. This gives you the best of both worlds since you have the portability of a touch pad, plus the practicality of a real three dimensional keyboard. Right now you can get the keyboard separately, but it is only a matter of time when the tech will be integrated into one single unit.

This idea is still in the concept stage, but we foresee a bright, intoxicating future. Just as the 3D printer is able to take a 3D digital model, basically a file on your computer, and translate that into physical objects such as machine or gun parts, the Chemputer would take this concept to the molecular level and enable printing of pharmaceuticals. Instead of ink, this printer would use a mixture of carbon, hydrogen, and oxygen, the basic building blocks of most drugs, as well as certain agents such as vegetable oil and parafin.

Imagine the uses: diabetics could print their own insulin at home, personal Chemputers could be used in third world countries to print out the exact needed drug at the right time to save lives. Obviously this would have a huge impact on the medical and pharmaceutical industry as well as drug research. With the chemputer, you would go online, download your medication and then print it out, all from the comfort of your home.

You're welcome to add your own usage ideas in the comments below. 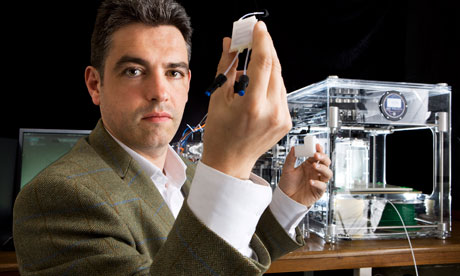 Just as the Kinect has revolutionised gaming with its motion sensing technology taking the place of a joystick or other physical device, a soon-to-be-released technology by Leap Motion could change the way we use our computers. Not only would this highly accurate motion-sensing technology replace the mouse or keyboard, it would even send touch-screens to the antique pile, being much simpler and more natural to use.

Imagine raising your hand and an icon appears, almost by magic, on your computer's screen. Using naunced gestures you'de be able to navigate the web, clicking on links with just a tap, minimizing screens or zooming into images with a flick of the wrist. Even games could use this technology to transform your entire body into a living game control - no special suit required. Soon you'll be able to watch the movie "Minority Report" with your friends and boast that your computer can do the same as Tom Cruise's, and this time it won't be a lie.

Even though wireless charging is already available for low-power applications like electric toothbrushes and artificial hearts, this technology still has a way to go before it can be used to charge everyday household devices, cellphones, and even electric cars. The technology behind wireless charging has been around since the turn of the century and was initially suggested by Nikolas Tesla.

The possibilities are exciting. What if you could sit at a coffee shop, place your phone on the table, and it would immediately start to charge? No cables needed, no clumsy connections. You would theoretically be able to charge your phone whenever required; your car, the office, even a restaurant. Even better: no more fussing with different chargers for different phones, having to buy a new charger when upgrading - they'd all have the ability to charge through the air using the same device.

When you just start out, it's exciting and fresh. As the years go by, it becomes habit and loses its lustre. Driving is a part of life for millions around the world, enabling fast and easy transportation of people and goods, but also leading to many yearly fatalities from wreckless driving. Imagine getting into your car, talking to the voice-activated computer and telling it where you'de like to go, then nodding off to sleep, secure in the idea that your car will be able to drive you to your destination without your help.

Well, not only is this going to be a reality in the coming years, Google is already deep into the advanced stages of research, and driverless cars have already logged thousands of miles, having traversed the windy hills of San Francisco, cruised over the Golden Gate Bridge and even run laps around Lake Tahoe. The cars navigate using advanced GPS technology as well as special laser sensors mounted on the roof to help "map out" the area around the vehicle. They know to stop when there's a pedestrian on the road, and to drive when the traffic light turns green. Say goodbye to your designated driver!

A look inside Google's "Driverless Car"
3
5

Just as technology has advanced to the point where the cochlear implant is helping deaf people to hear, the idea behind the bionic eye is to help the blind, or those with very poor eyesight, to see. Researchers are making fast advances in developing artificial eyes that would give sight to the blind, and prototypes are already available that provide grainy images. However, the eye is much more complex than a regular camera and complex software, such as missile tracking technology, must be employed in perfecting the technology.

We believe there will come a time when everyone will be able to see with perfect eyesight. That future is closer then you imagine.

The world is coming to terms with the need to ween itself of fossil fuels, which are quickly getting depleted and becoming more expensive to extract from the earth. Biofuels can be used in the place of fossil fuels in certain cases as they're derived from biological matter like vegetable oils, animal fats and so on. Unfortunately current technology has created biofuels that rely mainly on food, causing an increase in global food prices.

Today scientists are focusing their research into next-generation biofuels which would be generated from non-edible sources such as corn stover, switchgrass, woodchips, and miscanthus. In 2010 biofuels provided around 2.7% of the world's fuels for road transport, mainly through ethanol and biodiesel. It is believed that biofuels could help meet up to a quarter of the world's fuel needs by 2050.

This highly durable, efficient optical grade glass will be used in the future to allow any flat surface, from the mirror in your bathroom, to a picture hanging from the wall in your bedroom, to be used as an integrated computer screen. Together with a household computer system you will be able to access the internet, control your "smart" house, and get instant information about your fridge temperature or anything else, at the touch of a surface/screen.

Imagine brushing your teeth in the morning and simultaneously getting your news from the bathroom mirror. Your refrigerator would have touch capabilities, enabling you to continue with the news, display favorite family photos or even video chat with grandma from your fridge door. Then move it all to the kitchen table with just a touch. Photovoltaic glass can also house solar cells laminated between glass layers, meaning that soon every window will become an energy generating solar panel.

Graphene is basically a substance which is 300 times stronger than steel and made of only a thin layer of pure carbon, making it literally as light as a feather. Each sheet of graphene is only one atom thick, and one square meter weighs just 0.77 milligrams. In 2010 the Nobel Prize for Physics went to scientists researching this super film, and in 2013 a 1 billion dollar grant was awarded by the EU to researchers in the field.

The uses of this technology could be revolutionary: Space exploration and the aviation industry would benefit from the extremely light and strong material that could be used in aircraft construction. Graphene could revolutionize electronic devices by enabling lightweight, thin, flexible, yet durable display screens, cellphones, and much more. Graphene would also revolutionize transistor componentry and solar pane construction.

The discovery of DNA has led to humanity's deeper understanding of living organisms and viruses, as it's basically a set of instructions and information encoded into molecules. Just as mother nature uses DNA to store biological information, so too have scientists discovered a way to store and encode digital information into DNA, enabling storage of massive amounts of data in a very small space. In fact, one gram of DNA can store at least 2.2 million gigabits of information, which is over 450,000 DVDs worth of storage space.

Using this new method of storing data, it will now be possible to store all the data that has been accumulating during the digital age, and much more. Written, audio and visual information have all already been uploaded into DNA then retrieved by DNA sequencing. The future of bio-computing is here.